History: Angus is a delightfully boisterous terrier who happens to be our Practice Manager Tabatha’s number 2 child – along with Gemma the Miniature Fox Terrier, Pee-Nut the ‘heinz variety’ terrier, Paolo the parrot, and Bearded Dragon’s Brett and his girlfriend Maxi (Maxi was April’s Patient of the Month). Tabatha brought Angus in to see Dr Kate as she was concerned about a large mass which had suddenly appeared on Angus’s right hind paw. 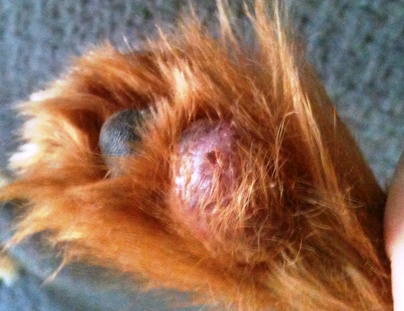 Tabatha was understandably distressed as she was packed and ready to travel for her (much deserved) holiday to Bali.

Examination: Angus was uncomfortable when Dr Kate gently palpated the mass, but she carefully performed a fine needle aspirate to try and get some more information as to what type of mass Angus might have. A small needle was used to suck some of the cells from the mass and the cells were then examined under the microscope. The cytology on the mass indicated neutrophils (a white cell common to infection) and lymphocytes (another white cell of the immune system). It was still not possible to determine the exact nature of the mass, whether it was truly a tumour or a response to an infection or ‘foreign body’ – such as a grass seed or splinter which penetrates the skin and sets up a localized infection or growth. Tabatha and Dr Kate decided the next step in diagnosing the mass was to perform a biopsy of the mass under anaesthesia – this would allow Dr Kate to ‘explore’ the mass (look for a foreign body) and collect a sample of tissue which could be submitted to the laboratory for histopathology (analysis by a Veterinary Pathologist).

Angus was very brave for his anaesthetic and as there was no evidence of a puncture wound, grass seed or splinter, three tissue biopsies were performed. The biopsy sites were closed with sutures and Angus’ paw was bandaged so that the biopsy sites could heal. The biopsy samples were sent to the laboratory and the diagnosis was ‘focal adnexal dysplasia with multifocal areas of pygranulomatous inflammation, furunculosis and oedema’. This is a baffling-sounding diagnosis but quite good news as it meant the tumour was benign and unlikely to spread throughout his body. Unfortunately though, these masses are difficult to treat with medication alone so complete excision (to completely remove the tumour) is the best way to ‘cure’ the patient. As the mass was quite large and in a very difficult place to completely remove, Tabatha and Dr Kate decided to arrange for a veterinary surgeon with extensive experience in such surgeries to come to the clinic to perform the major surgery on his paw and place a skin graft to allow the wound to heal. As the mass was not malignant (nasty) it was decided that Angus would start on oral medication and daily bandage changes and have his surgery scheduled in 14 days – enough time for Tabatha to have her holiday!

Treatment: On the day of Angus’ surgery, veterinary surgeon Dr Lyn Minhinnet came to the clinic with her knowledge & expertise, and removed Angus’ mass and performed a skin graft with tissue removed from his right chest area. A new special bandage was placed on Angus’ paw which required removal and replacement under anaesthesia (so Angus would not move and disrupt the graft) 5 days later. 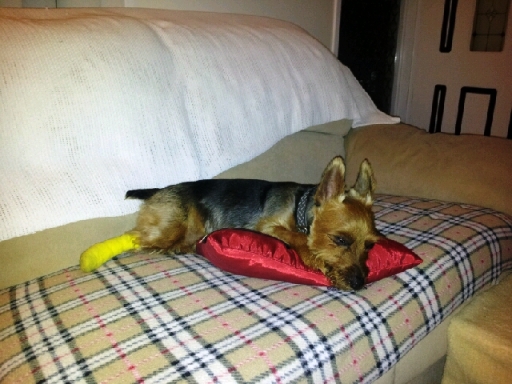 << Angus recovering from surgery at home on the lounge with his favourite pillow….

Dr Nichola performed the first bandage change and the skin graft looked great – it was cleaned and a new bandage was placed.

Below: you can see the foot with the skin graft (new skin grafts do bleed and this is a good sign as it shows there is blood going to the new skin). Also pictured is the site where the graft was taken from on Angus’ chest, it is healing very well. 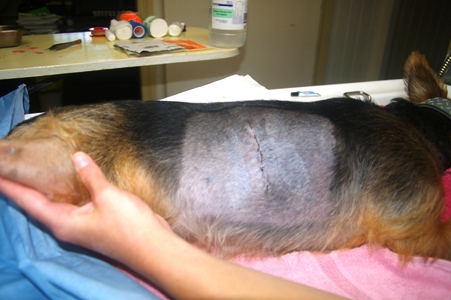 The new bandage was changed one week later and photos were taken and sent to Dr Lyn who agreed that Angus’ skin graft looked fantastic. Angus required a few more weeks of frequent bandage changes which he tolerated like the brave soldier that he is.

Below: is what the foot looked like on day 11 & 15. You can see the hair is already starting to grow on the skin graft! This is a very good sign. 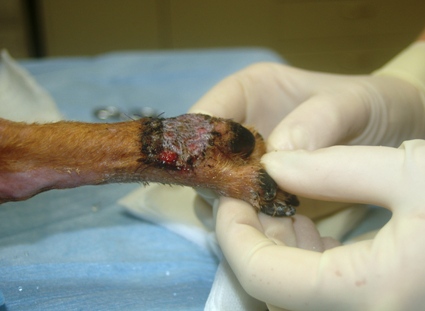 Today, the surgical site has now completely healed and Angus is as active and happy as ever.

Below is Angus (left) enjoying a day at the park with his brother and sister Pee-Nut (in the centre) & Gemma (on the right). 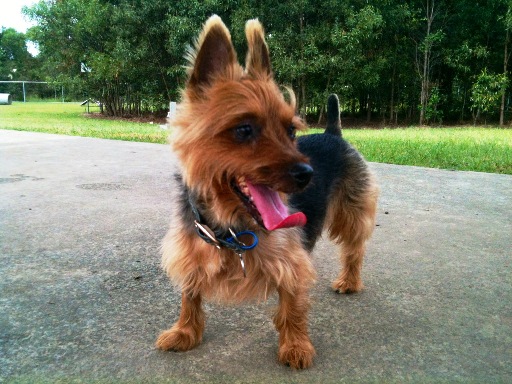 There is only one sign that Angus has had surgery of any kind – the piece of tissue that has been grafted to his paw has hair of a different colour with the hair growing in a different direction. It is a special hair pattern for a rather special boy. 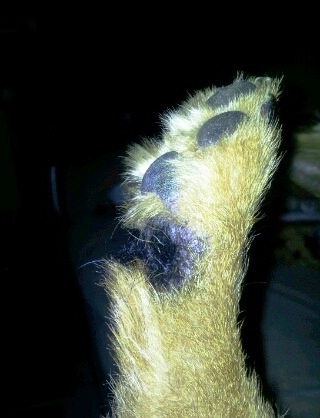