In memory of Apollo.

History: Poor little Apollo had been run over by a car several years ago and ever since then he had been totally blind in both eyes. Apart from that, he had been in very good health. However, for the last few months one of his eyes had become increasingly watery and sore. Apollo had visited another vet recently and been prescribed some eye drops for this, but they were not helping at all.

Examination: Apollo was brought into the clinic to see Dr Leonie. Dr Leonie examined Apollo and found that his left eye was quite swollen and painful. There was also a blood tinged discharge coming from it. The right eye was a normal size and non painful. 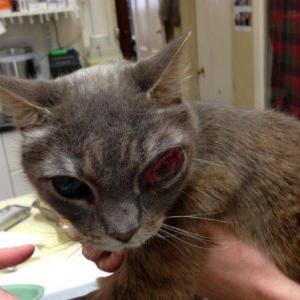 Plan: As the eye was so painful there was only one option available for Apollo to gain relief and that was to remove the eye surgically. As Apollo had no vision in this eye anyway, there was no reason not to proceed with this surgery.

Treatment: As Apollo was approaching his senior years, Dr Leonie ran a pre-anaesthetic blood screen prior to surgery to ensure that his organs were all in good health and that he would handle the anaesthetic well. These blood screen tests all came back normal.

An intravenous catheter was placed in Apollo’s left leg. The induction anaesthetic was given into the vein and Apollo was maintained on a gas anaesthetic.

Nurse Kellie clipped the hair around his eye and prepped the area for surgery.

Dr Leonie carefully removed the left eye. It was a fairly straight forward procedure with minimal blood loss. After the eye was removed there was a large deficit remaining so Dr Leonie sutured the skin over the deficit so that the eye looked as though it was closed. 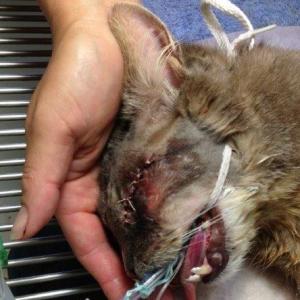 Apollo was given several days of pain relief and antibiotics to ensure the area healed well.

Ten days later Apollo came back to see Dr Leonie for his sutures to be removed. He had recovered beautifully from the surgery and both Apollo and his owner seemed so much happier. 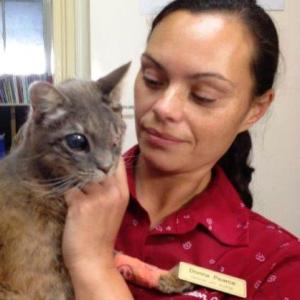 However, not long after this, the empty socket continued to swell and it almost doubled in size. Apollo was brought back to see Dr Leonie and a tumour growing in the socket was diagnosed and sadly Apollo had to be euthenased.  This was a very sad outcome for everyone after he had gone so well with the surgery and appeared to be recovering well. Apollo was a beautiful boy and is sadly missed by his doting owner.