History: Cosmo was presented to Wilston Vet after being hit by a car. His owners did not see the accident but noticed him running towards the house and then becoming lame on his left hind limb. A short while later, Cosmo was not using either of his back legs and they rushed him down to the Surgery.

Examination: During the initial examination, Cosmos vital signs such as temperature and mucous membrane colour appeared normal. His chest was clear of noises such as fluid build up in the lungs, and his bladder was intact. Abdominal palpation showed no signs of injury. He did however have pain upon hip manipulation which could have indicated a fracture. There was lack of anal tone (around his bottom) when his temperature was taken, and he did not seem to be able to feel his tail at all. He was holding his tail down flaccid and was unable to move it. A needle prick around his back end showed little response. It was concluded that he has sustained an injury to his pelvis as well as some nerve damage to his hind end.

As it was getting late, Cosmo needed transferring to the Pet Emergency Clinic so he could have x-rays and be monitored through-out the night. After further examinations at the pet ER, Cosmo was placed on a drip and had radiographs (X-Rays) taken of his pelvis and spine. These showed he had a left ischial fracture (broken bone) and a sacroiliac luxation (also called a dislocation, where the bone is displaced from the normal position within a joint). 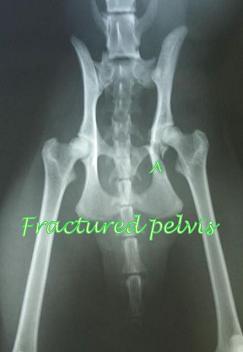 Plan: It was decided to treat Cosmo without surgical intervention as the broken bones were minimally displaced. Treatment consisted of strict cage rest for 6-8 weeks. Pain was being managed by a special “Fentanyl Patch”. This is an opiod drug which is released slowly into the blood stream over a period of 7 days. Cosmos owners were very diligent at keeping him rested in the cage so his bones began to knit together nicely. After the 6 weeks he was allowed out of his cage and seemed to be managing everything OK apart from being slightly wobbly on his back legs. Not long after, his owners noticed a very big swelling that was developing over his left leg. This swelling was about the size of a cricket ball. His owners brought him back to the Surgery to be examined.

Examination 2: Despite the current problem, Cosmos vital signs such as heart and respiratory rate were within normal ranges and his temperature was also normal. Palpation of his abdomen was performed. 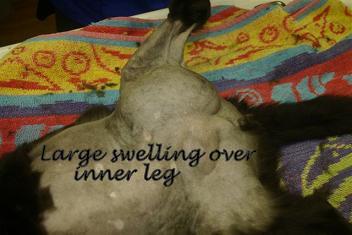 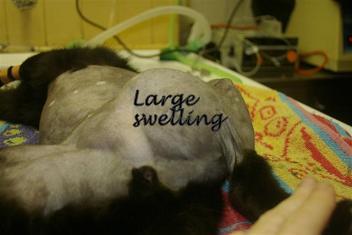 A fine needle was inserted into the lump and just over 300mls of serous fluid was drawn out. 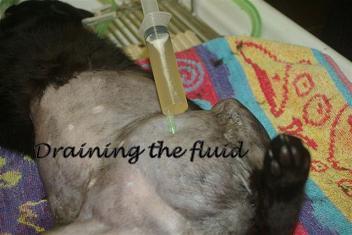 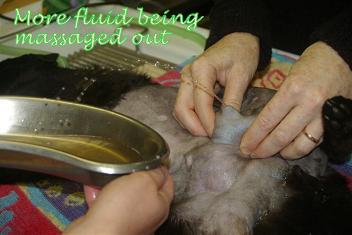 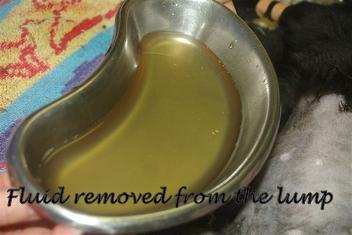 Plan: Cosmo was booked in to have exploratory surgery of his lower abdomen to find the cause of the problem. He was placed on a drip and given a pre-medication injection. During surgery an incision was made over the lump to reveal folding and pocketing of the subcutaneous tissues with multiple capsules that were filled with fluid. The abdominal lining was intact so there was no evidence if a hernia. This meant a tiny hole somewhere in his abdomen was allowing the peritoneal fluid to leak out into the subcutaneous space. Despite a long time searching, the origin of the leak could not be identified. 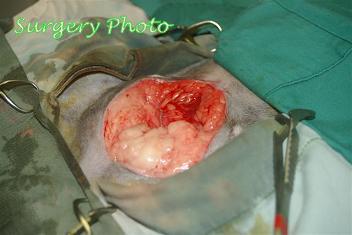 The capsules were dissected and removed, and an attempt was made to close the dead space in the tissue that was filling up with the fluid. Cosmo was then sutured up and a rubber drain was inserted to drain further fluid out of the abdomen and prevent another lump occurring. A head collar was put on to prevent him from licking at his wound. The next day Cosmo was sent home to continue his recovery. Strict rest was again advised to allow the area to heal.

Just over a week later Cosmo was back at the clinic. Apparently he got the better of his head collar and had been licking at his wound. Unfortunately this caused the wound to break down and completely open up. The tissue was oozing and inflamed and some parts were necrotic (dead). Cosmo was anaethetised again to debride and clean the wound and re-suture. 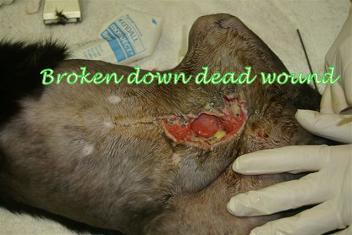 This time instead of placing a head collar on Cosmo, the vet team made up a special nappy like bandage so he couldn’t lick his wound. 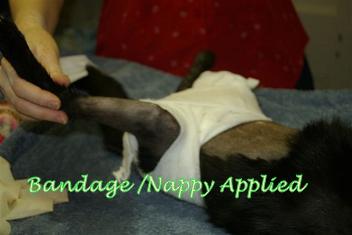 This also acted to absorb the draining fluid. Cosmo would need ongoing care and bandage (nappy) changes for the next few weeks as well as a lot of rest and quiet time. 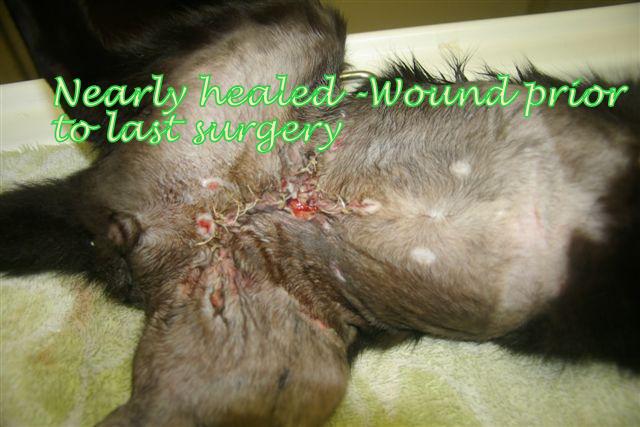 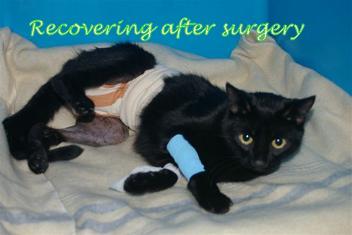 After 4 bandage changes and another anaesthetic to re- suture some of the wound that had again broken down due to the continual draining of fluid, his last sutures and his last bandage were finally removed. 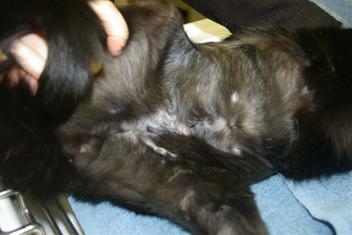 Thankfully the fluid had stopped leaking and the wound had completely healed. It was a very long road to recovery but we finally got there!

The staff, Cosmos owners……….and of course Cosmo, were delighted that the ordeal was finally over and he could go back to his spoilt kitty-cat lifestyle!