History: Gina came in to see our vet Nichola on a Saturday morning in late November. She walked into the clinic holding her right hind leg off the ground. Gina’s owner had noticed that she had suddenly started limping on the previous Thursday night after she had been running around in the garden. Her lameness hadn’t improved since then.

Examination: Gina is a very stoic girl and did not show any obvious pain on her physical examination. Nichola ascertained that the pain appeared to be associated with her right knee. A ruptured cruciate ligament was the most likely differential diagnosis and this injury is suspected if increased movement can be seen when the knee is gently palpated. Gina was very tense, so Nichola couldn’t be certain that a ruptured cruciate ligament was the main injury. Gina was sent home with anti-inflammatory/pain relief medication and instructions for strict rest. She was booked in for x-rays on the Monday morning.

Dr Meredith anaesthetised Gina on the Monday morning. Dogs are nicely relaxed and pain-free under anaesthesia so Dr Meredith was able to feel the typical increased movement seen with a ruptured cruciate as well as a dislocating knee cap. Gina’s x-rays were very interesting as they revealed inflammation that is usually seen with a cruciate rupture and surprisingly a fractured fibula (the thin bone that runs along side the main bone in the lower leg called the tibia) was also apparent. Gina’s hips showed mild changes associated with ageing, and her ankles looked normal. 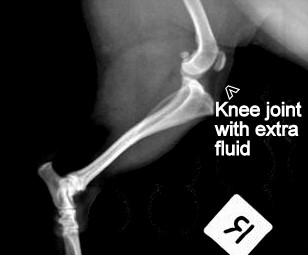 Some small dogs can cope with ruptured cruciate ligaments without surgery. However, with Gina’s combination of injuries, Meredith recommended that surgery would result in the best outcome. Gina’s owners agreed to go ahead with surgical repair, so a veterinary surgeon was booked to come to our clinic to perform Gina’s surgery. 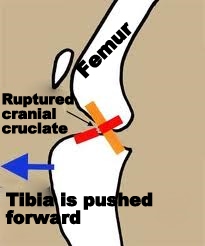 Treatment: The surgeon saw that Gina’s cruciate ligament had ruptured completely but could see that her fractured fibula was healing nicely. So the procedure was done to stabilized the knee using the ‘De-Angeles’ method where nylon is passed through a bone tunnel in the tibia and around one of the small bones at the back of the knee (called fabellas) and secured with a metal toggle. This reduces the abnormal movement within the knee. It also helped to prevent the knee cap from dislocating. 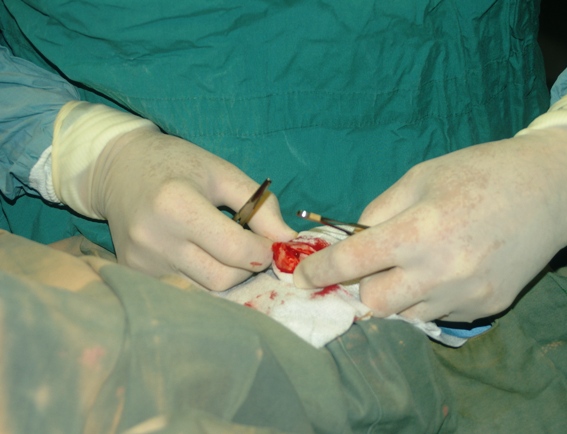 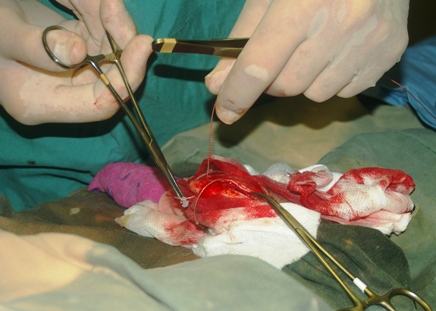 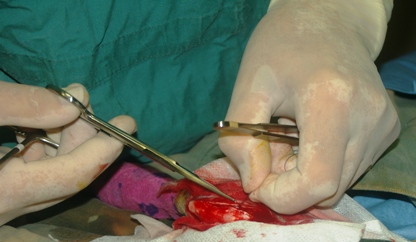 Gina was her usual brave self in hospital after her surgery and she recovered quickly as you can see in the pictures below of her the day after the surgery! 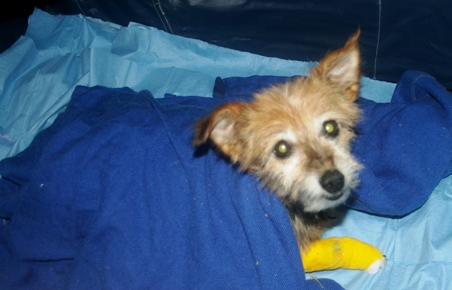 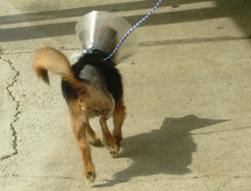 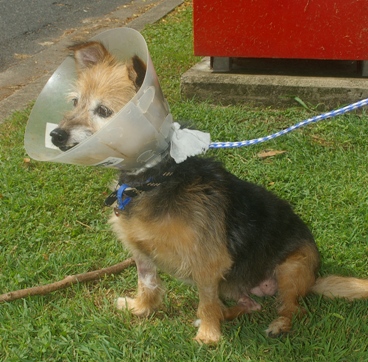 She was discharged with pain medications, antibiotics and instructions for 2 weeks of room confinement and 4 weeks of supervised mobility. Gentle physiotherapy was recommended.

We wish Gina all the best for a happy Christmas and New Year with her family and a speedy recovery. We look forward to seeing her walk into the clinic on all four legs in the New Year!