History: Harry is a lovable Beagle X Poodle who came in to see Dr Meredith because of a sudden lameness in his right hind leg after his owners were playing with him in the back yard.

Examination: Dr Meredith took Harry for a walk with Nurse Cherrelle up and down the street to confirm exactly which leg Harry was limping on. On closer examination, after ascertaining which leg he was lame on, Dr Meredith found that digit 5 of his right hind foot (pinkie toe) was sore on palpation. An X-Ray of the toe would be needed to confirm if the toe was broken or if it was just a muscle injury. Given that Harry also had a heart murmur (turbulence over the heart when listened to with a stethescope), Dr Meredith elected to take X-Rays of Harry’s toe whilst he was awake, rather than giving him a sedative for the procedure. The X-Rays revealed the toe was indeed broken. 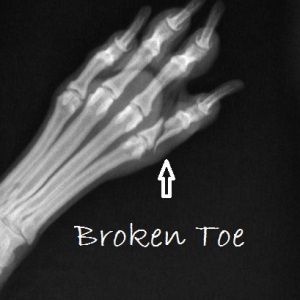 Treatment: It was deemed necessary to anaesthetise Harry in order to apply the cast required to stabilise his toe. Very special care was taken for this due to his heart murmur, which did pose an increased risk of complications under anaesthetic. Dr Meredith used a special casting material that when placed in hot water can be moulded into the shape needed. Cotton wool was placed between the toes so that they didn’t get moist and rub together causing pressure sores. The cotton wool was also placed around the whole foot and half way up the leg for support. The splint was then placed on the back of the foot and leg for support followed by more cotton wool. An elasticised sticky bandage was then wrapped around it all to keep it all in place and prevent slippage.

The anaesthetic went well and Harry woke up very nicely. He had an elizabethan collar (plastic head cone) fitted to him to stop him from chewing or removing the cast.

Aftercare:Like most broken bones, six weeks rest is needed for healing. The cast needed to stay dry and clean as much as possible, so Harry got to spend a few days at the clinic whilst it was raining. Dr Meredith scheduled Harry to come back on a weekly basis so that the cast could be checked for slippage or discharges / smells (signs of secondary skin infection).

Once again, because of his beautiful nature, Harry did not require sedation for this mid-way follow up X-Ray. The X-Ray showed that the toe was healing well, but not fully healed yet.

The cast was reapplied but as there was a small pressure sore on the tip of the hock (the back side of the heal area); Dr Meredith re-used the same splint and put extra padding around the pressure sore to prevent it worsening. Weekly checks of the cast were still needed. 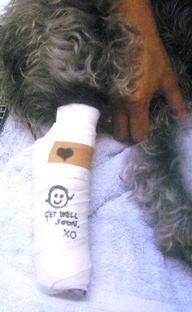 Three weeks later the second cast was removed and another X-Ray of the toe was taken. Even though the toe had not healed completely, given that Harry was fairly sedentary and the fracture was well aligned, Dr Meredith elected to leave the cast off. The gorgeous Harry got a well deserved bath and blow dry by Nurse Donna, and two weeks minimum of STRICT rest was prescribed.

Harry’s toe will continue to heal well at home over the next few weeks as he enjoys lots of R and R. 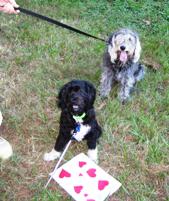