History: Isabella was presented to Wilston Vet on 16th August 2009. The night before she appeared to be well, but in the morning she was collapsed, unable to stand, was shaking and seemed quite distressed.

Examination: Dr Philippa Cox started with an initial thorough check over of Isabella. Her abdomen was very tense and guarded. There was discomfort of the mid lumbar region of her back when digital pressure was applied. Dr Cox listened to Isabella’s chest, but she was panting, so it was difficult to hear to her heart. There were also grunting sounds coming from her upper respiratory tract possibly associated with stress and/or pain. When her temperature was taken it was found to be 39.7 degrees which was high. Due to the painful lumbar region, and a fever, a kidney infection was suspected. Further tests were required to assess Isabella.

Plan: Day One: Isabella was admitted into hospital and given pain relief to keep her comfortable and an antibiotic injection. Blood tests to check kidney and liver function were taken as well as a complete blood cell count. While awaiting results, Isabella was placed on an intravenous drip to keep her hydrated.

Blood results showed that kidney and liver function were normal, however the complete blood count test showed a high level of neutrophils which are a type of white blood cell. Neutrophils are recruited to the site of injury within minutes following trauma and are the hallmark of acute inflammation or infection.

Day Two: The next morning Isabella was unable to stand properly due to severe lumber pain and she was sitting up on her haunches to try to relieve her discomfort. She was given more pain relief medication. Her temperature was still elevated so another antibiotic injection was given. After ruling out a kidney infection, Dr Cox decided to x-ray Isabella to assess her spine. Dr Cox was thinking that a problem with her spine such as an infection (Discospondylitis) a disc herniation, or a cancer could be possible. X-rays were taken and thoracic/lumbar disc collapse as well as discospondylitis was confirmed. 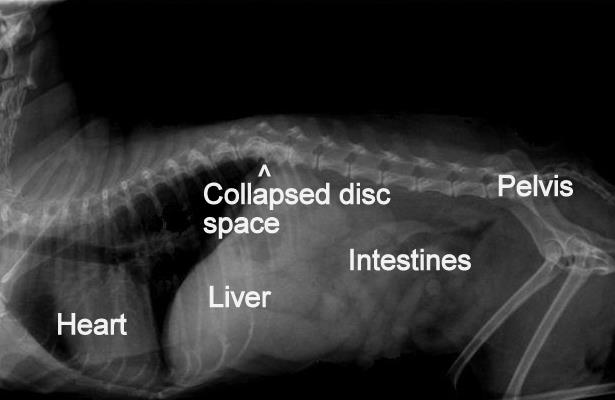 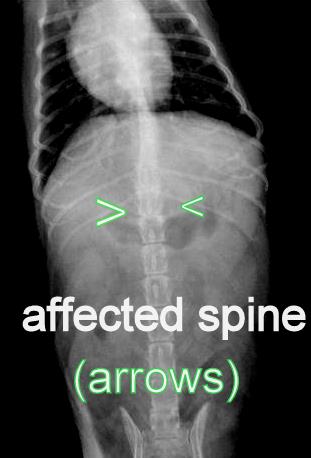 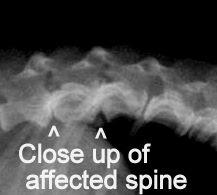 Isabella was prescribed an additional antibiotic to combat the infection in her spine and her pain was to be managed with a narcotic dermal patch. This is a small patch that attaches to the skin and slowly releases an analgesic drug called fentanyl over five days. Intra-venous fluids were maintained and Isabella continued to rest in the hospital ward. Food and water were offered, and she ate a little.

Day Three: The next day Isabella was much brighter. Her fentanyl patch seemed to have kicked in and her temperature had come down! Clinic staff were very happy. She was carried outside to toilet as she still could not stand, but she managed to urinate on her own, nonetheless. Antibiotics and IV fluids were continued for another day.

Day Four: On her fourth day in hospital Isabella managed to stand and take a few wobbly steps! She seemed to be sleeping comfortably and was not distressed at all. Isabella was taken off the IV fluids and prepared to go home the next day. Isabella’s family was instructed to restrict her movement as much as possible and have regular outings to the grass to go to the toilet. Antibiotics were to continue as directed, and a revisit to the clinic for removal of the narcotic patch in two days was organized. Lots of cuddles were also prescribed!

Follow Up: Isabella had done very well during her first night at home. She urinated ok but had trouble passing faeces so she was given an enema which enabled her to pass her motion.A week later Isabella was continuing to improve and was toileting normally and walking with only a mild wobble! She was also eating and drinking fine. Antibiotics were to continue for a further three weeks.

A follow up call was again made two weeks later and Isabella’s family reported she was doing fantastic and was now steady on her feet. She seemed to be a pain free and a much happier little girl!……..even if she was having a bad hair day! 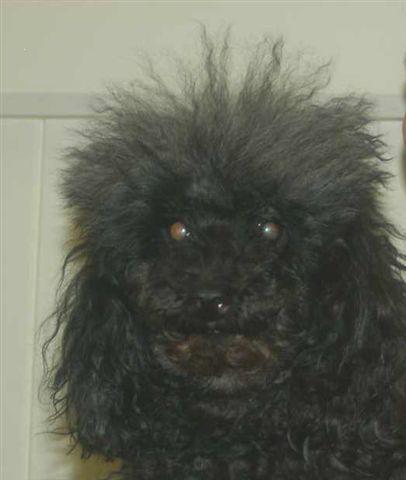