History: Jasper is a ridiculously good looking 2yr old Maine Coon cat who emigrated to Australia from England with his Maine Coon brothers Emile and Cobalt in November 2011. 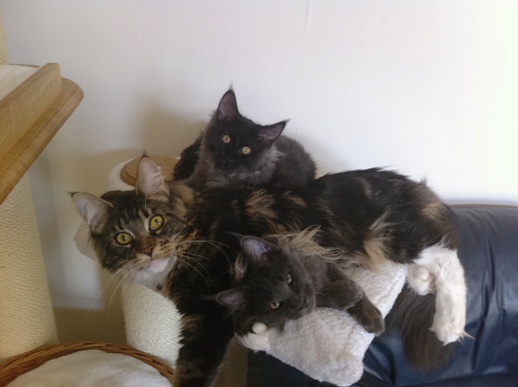 We came to know and love the boys over the three months they boarded with us in our cattery while their parents were making the big move down under.

One weekend Jasper’s mum and dad noticed that he was limping on his left hind leg. He had also been hissing at his brothers – very unusual for Jasper as the boys are normally great friends. He was otherwise well but wasn’t eating quite as much as he normally did. The cats were always playing roughly and sliding over the wooden floors in their house so the most likely cause of his pain was a soft tissue strain.

Examination: Dr Nichola had a good look at Jasper. He was limping around the consult room and not really placing any weight on his back left leg. On closer examination, Nichola couldn’t find any specific injuries but he was definitely sore in is hip and / or knee. There were no specific areas of swelling but the leg was generally quite painful. An in-house blood test was performed to check that Jasper’s kidneys and liver were in good working order so that he could be placed on anti-inflammatory (pain relief) medication. Nichola was hoping that Jasper had muscle strain which would respond to pain relief and strict rest. It was recommended that Jasper be bought in for a re-check 3 days later or sooner if his mum and dad were concerned.

The next day Jasper’s mum went in to the room in which Jasper was being rested to find him hissing, biting and very distressed. Jasper had run into the wardrobe and wasn’t placing any weight on his hind leg. He seemed extremely painful and was refusing to eat any food. Jasper had never acted in this way before!

At Wilston Vet, Nichola was very concerned as Jasper was nothing like his normal friendly self. He was hissing and biting and definitely much more painful than the previous day. He was so painful that is was difficult to examine him conscious. It was decided that the next best plan of action was to hospitalise Jasper for the day and to perform X-Rays to try and locate the cause of his extreme pain.

Dr Kate anaesthetised Jasper and took X-Rays of his hips and both hind legs. It was immediately apparent that there was a serious abnormality of Jasper’s left hip. The ball part of Jasper’s femur (where it attaches to the hip i.e. the ball and socket joint) had separated from the rest of the femur at the growth plate (a capital physeal fracture). 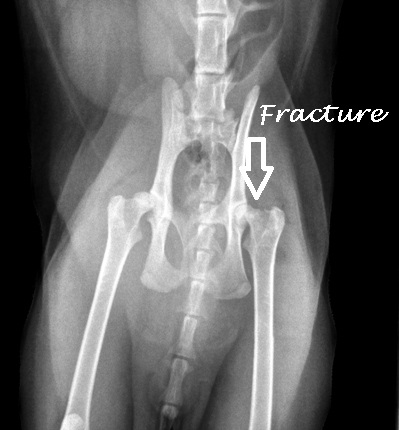 This injury was consistent with Jasper’s sudden and extreme lameness. It was thought that the best treatment for this condition was a femoral head ostectomy (where the ball is surgically removed completely from the hip) but assessment by a specialist veterinary surgeon was recommended. Luckily Jasper has pet health insurance so his owners took him straight to the Queensland Veterinary Specialists for assessment by a specialist surgeon after receiving some long acting pain relief.

Treatment: The following day the specialist surgeon successfully performed a femoral head ostectomy of Jaspers hip. On review of our X-Rays the surgeon was concerned that Jaspers right hip was also showing similar but mild degenerative changes. He became suspicious that Jasper may have ‘epiphyseal dysplasia’. Epiphyseal dysplasia is a condition mostly seen in young adult male cats with Maine Coons being one of the most commonly affected breeds. Typically cats affected by this condition will have a history of hind leg lameness with no recorded traumatic incidents occurring previously. Initially cats with epiphyseal dysplasia will have only one hip affected but in most cases both hips will eventually deteriorate.

Jasper recovered extremely well and he started using his left leg the day following his surgery. He was discharged with instructions to be kept quiet and confined but with encouragement for controlled use of the leg. Crazy polished wooden floor sliding play with his brothers was unfortunately discouraged.

Jasper boarded in our cattery again this month and we are so pleased to see him walking around well and happily playing with Emile and Cobalt. His mum and dad are aware that unfortunately Jasper may still require surgery of his right hip in the future but at the moment everyone is very pleased with his progress!

Below are a few snaps of Jasper enjoying time at home with his family! 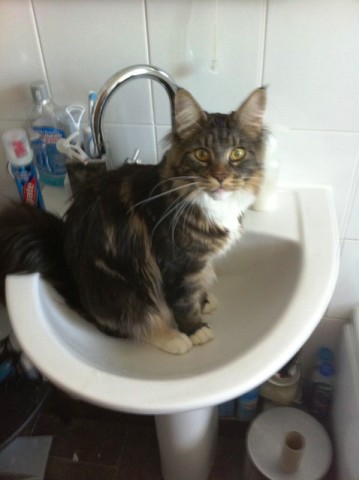 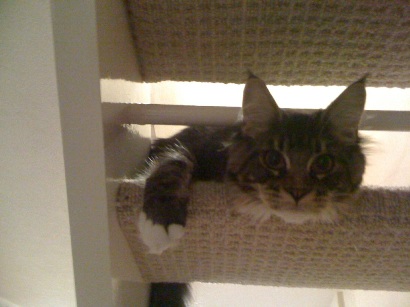