History: Bella presented to Wilston Vet with an unusual history. Her owners had removed a tick about 4 weeks prior, but in the few days leading up to her presentation, she had started to limp and appear weak in her hind legs. Bella also had just come of heat. (Female dogs that are not desexed come into heat every 6 months)

Examination: Bella arrived at the clinic with what first appeared to resemble symptoms of tick toxicity – (weakness in the hind legs.)Dr Kate and Nurse Melissa searched Bella all over for a tick, but did not find one. However, as Bella was displaying the early symptoms of a tick toxicity, she was quickly put into a tick bath just in case there was a tick that could not be found (Often ticks can be very hard to find, especially in a large thick coated dog).Dr. Kate also took some blood from Bella to send off to the laboratory to check for any internal conditions that could present with similar symptoms. The blood was marked urgent and thankfully the results came back that same day. The results showed a very high white blood cell count which indicated an infection somewhere in Bella’s body. This is why she was so weak in her back legs.

Dr Kate immediately commenced antibiotic treatment. Given that Bella had recently been in season, Dr. Kate suspected that she may have an infection in her uterus called a Pyometra (a common and life-threatening infection that mostly affects older un-desexed female dogs). There was no evidence of infection anywhere else that could be easily identified in her body or organs, so this was the most likely cause. Dr Kate recommended an ultrasound to definitively diagnose Bella’s condition, but as Bella had picked up so much on the antibiotics, her owners decided to take her home and continue the antibiotic tablets over the weekend. Dr Kate advised her owners that Bella would require surgery if she did not improve dramatically on the antibiotics. This would be a major surgery for Bella so her owners were understandably cautious and very worried.

Treatment: Bella returned to the clinic on Monday morning as she had not improved, but had in fact worsened. Bella had vomited a few times and now had a pussy, bloody vaginal discharge confirming our initial suspicion of a pyometron so an ultrasound was no longer needed for confirmation. Bella went straight to surgery.

On exploration of the abdomen, Dr. Meredith found that Bella had a very large fluid filled bulging uterus. Bella’s surgery took 2 hours and was quite complex. Nurse Melissa was asked to scrub in to assist with the surgery. Dr. Meredith had to be very careful and gentle with the surgery to ensure the uterus did not tear. The uterus was very fragile as it had been stretched from the bulging fluids in it. It would be disastrous if the puss ruptured out from the uterus and filled up Bella’s abdomen. If the uterus had burst prior to surgery, it would likely have been fatal for Bella. Once the uterus was removed, Dr Meredith flushed the abdominal cavity out with warm sterile saline to ensure it was completely clean before suturing Bella closed. 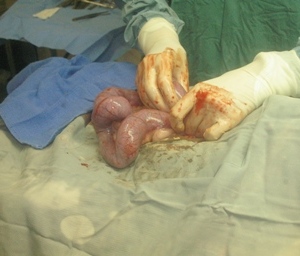 The above are images of the infected uterus. The normal diameter of a uterus in a dog of Bella’s size would be approximately 2-3cm. This one is approximately 6cm!

Because of the complexity of the surgery Bella was monitored very closely throughout recovery by Nurse Melissa. Bella was continued on high doses of pain relief to ensure her wake up from this major surgery was comfortable. Bella’s gums were pale indicating a large amount of blood loss so her blood pressure was also closely monitored and her intravenous fluids were continued until she went home later that night.

Bella was sent home with oral pain relief and antibiotic tablets and prescribed strict rest for the next 10 days.

Bella made a full recovery and she is now back to doing what she normally does. Sleeping, eating and more sleeping.