History: Maxi is owned by our Practice Manager, Tabatha. In November last year Tabatha noticed some swelling around the left elbow of Maxi’s leg.

Maxi has a long medical history which has included an undiagnosed illness many years ago that resulted in the loss of one of Maxi’s eyes and a lack of co-ordination. It was because of this that Tabatha assumed Maxi had possibly fallen and injured her leg. After a few days Tabatha realised this injury may be far worse than first thought as the swelling was increasing and Maxi who is usually a bit of a piggy, had gone off her food. So, although we have very limited experience with reptiles and do not regularly treat them here at Wilston Vet, Tabatha bought her in to work to have a basic check and X-Ray if needed.

Examination: Dr Kate examined Maxi and found her forelimb and elbow to be normal with the exception of the swelling. There was no evidence of cuts, puncture wounds or anything else that could have caused the swelling so X-Rays were taken. On the X-Ray Dr Kate could see there was an abnormality in the elbow joint. In the picture below you can see the difference between her normal right leg and abnormal left leg.

Dr Kate was not sure if it was a bone lesion (i.e. cancer), bone infection or a fracture so it was decided to email the X-Ray to Tabatha’s good friend and Bird, Reptile & Exotics Vet Dr Bob Donely at the University of Queensland. Dr Bob has many years of experience in reptile veterinary medicine and surgery and had previously even desexed Maxi after an infection of her uterus caused her to terminate a pregnancy!.

Dr Bob looked at the X-Rays, and advised that he would suspect Osteomyelitis (bone infection), tendonitis or a soft tissue injury. He suggested we collect a blood sample for testing to see if Maxi was healthy enough to give her anti-inflammatory medication to reduce the swelling and discomfort. Without testing the blood first, giving non-steroidal medication (anti-inflammatories) to a reptile could prove fatal. This simple test proved to be the first challenge for Dr Kate and Tabatha – neither of us knew how to do this in such a small lizard! Dr Bob explained that in lizards the best vein to use for blood sample collection would be her tail vein. Below is a picture demonstrating this – in a lizard MUCH larger than Maxi!

Due to Maxi’s size the vein, Dr Bob warned, would be very small and blood collection could be very tricky. Boy was Dr Bob right! Dr Kate and Tabatha stayed back late that night to collect a sample. Sadly only a small sample of blood was able to be collected, enough to run only a portion of the tests required. Maxi returned the following day to try again. This time Dr Kate was successful and a larger portion was collected, not as much as she would like, but we thought enough to run the tests required. The sample was sent off to the lab, however, unfortunately there was not enough to run a full reptile health panel, but at least we got some results. We forwarded the results on to Dr Bob who said the results were not enough to allow us to start anti-inflammatory medication. He offered, however, a solution – we could give Maxi oral pain relief! This was not going to be as effective as anti-inflammatories but at least it will be something.

Treatment: Maxi was started at home on the oral pain relief medication as well as antibiotic injections as directed by Dr Bob to cover her for infection. She wasn’t pleased with being syringed such an untasty medication and it was a challenge but Tabatha was able to get her to take it every night

A week later Maxi was brought back into work with Tabatha as she did not appear to be responding to either the pain relief or the antibiotics. A repeat X-Ray was performed and much to the dismay of Dr Kate and Tabatha, the bone lesion appeared to have gotten much worse. Dr Kate and Tabatha were now very concerned that Maxi may have cancer and they were beginning to consider Maxi’s quality of life as she was now unable to walk and was almost unresponsive and wouldn’t eat or drink. As a last ditch effort Dr Kate contacted Dr Bob again. Maxi’s options were discussed at length between Dr Kate, Dr Bob and Tabatha and it was decided to start a 2nd antibiotic and a special critical care food that needed to be syringed into Maxi’s mouth in addition to her current antibiotics and pain relief and give Maxi another week to respond. In the below X-Ray you can see how her elbow joint looks so abnormal – the elbow looks very white and the joint cannot be seen now.

Tabatha ordered in the antibiotic and the special food and started Maxi that day on both. To both Dr Kate, Dr Bob and Tabatha’s amazement Maxi began to respond within 24hrs! She was now raising her head and the swelling was going down. Now it was much more likely that Maxi had osteomyelitis rather than cancer. As the first antibiotic did not work it was stopped and Maxi was syringe fed her special diet and her oral pain relief until she began eating on her own. She was also to have the second antibiotic we started every 3rd day for 3 months. Maxi started eating on her own a week or so later and her oral medications were ceased. Maxi now just had to have her antibiotic injection every 3rd day for another 2 1/2 months.

Over Christmas Maxi just got stronger and stronger. She was getting back to her little piggy ways with her food and was trying to climb again which was a good sign. In late March, after 3 months of antibiotics, Tabatha brought her into work and Dr Kate re-examined her. Maxi’s elbow appeared to have no evidence of swelling however the bone felt a little abnormally shaped. Maxi had X-Rays again and unbelievably her leg appeared almost completely normal. Dr Kate and Tabatha immediately emailed Dr Bob with the news and a copy of the X-Ray which of course he was just as excited about as we were. 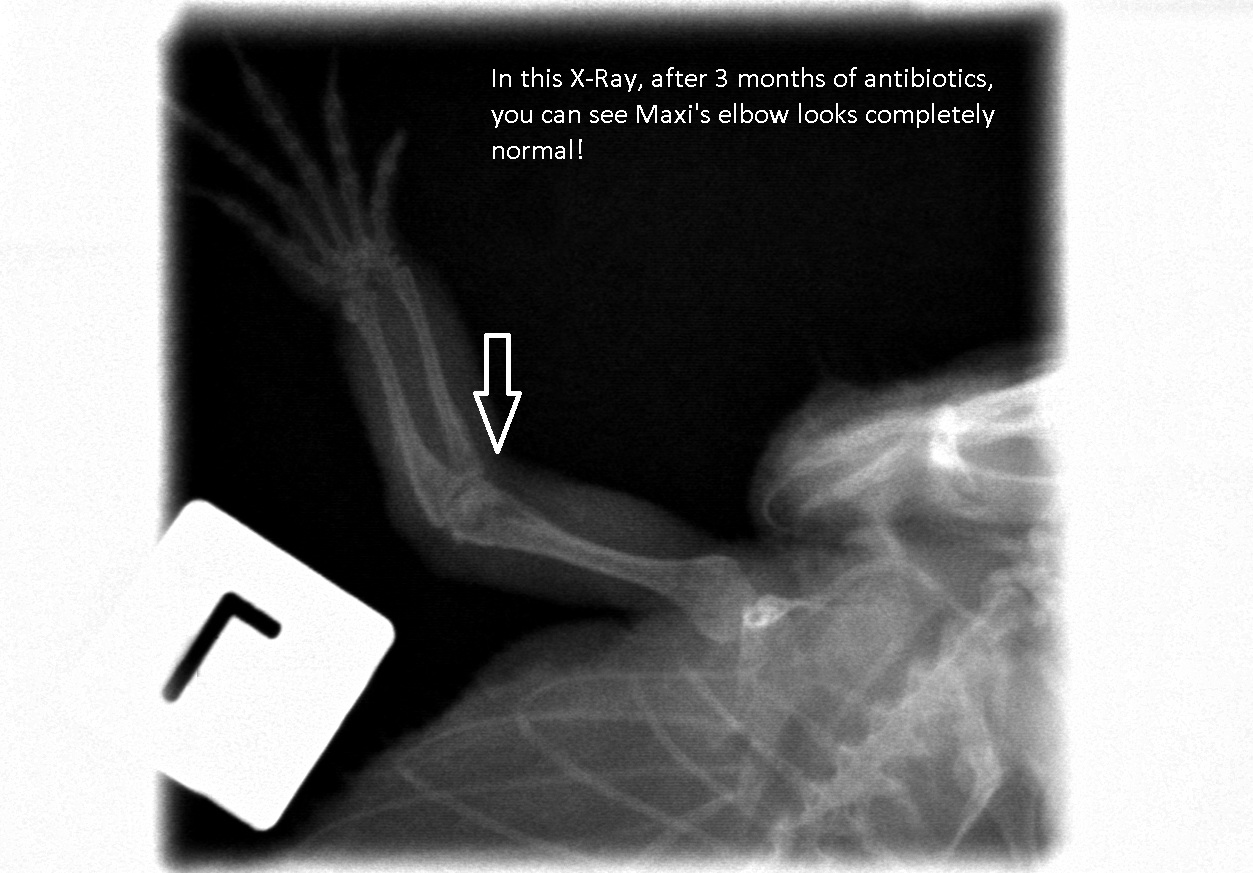 Above is an X-Ray of her elbow looking much more normal! You can see the swelling in now gone and the elbow joint is now able to be seen.

Maxi is now happily going about her regular daily life of a Coastal Bearded Dragon and is enjoying spending time with her boyfriend (Central Bearded Dragon) Brett. Of course due to her desexing a couple of years ago, Maxi and Brett are not able to have babies, but that doesn’t stop Brett trying all his manly moves on Maxi now that she is feeling much better! 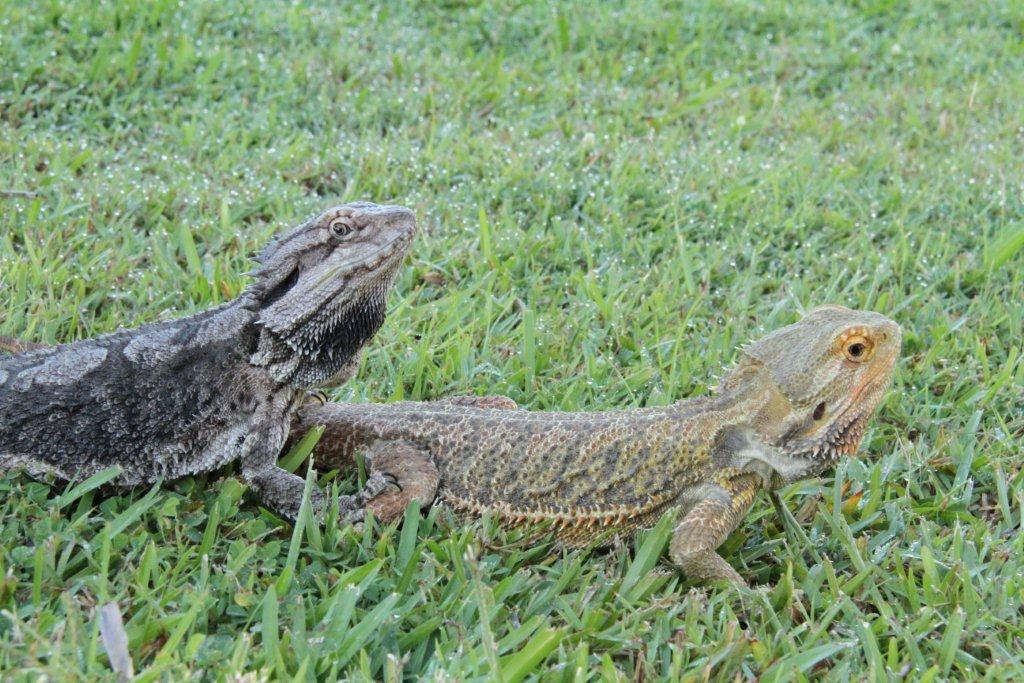 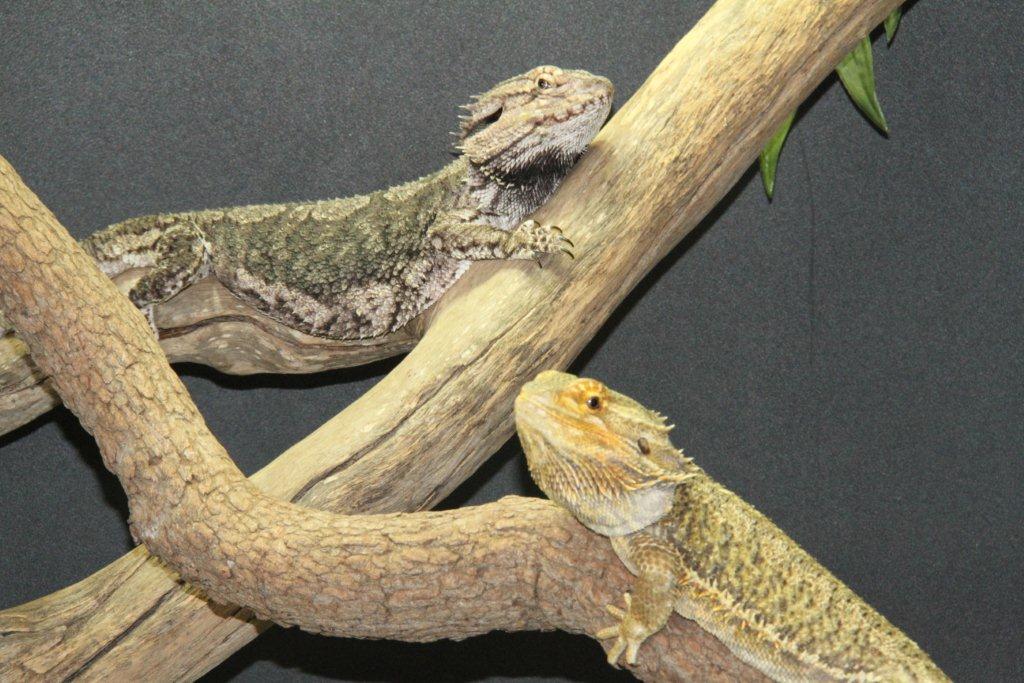 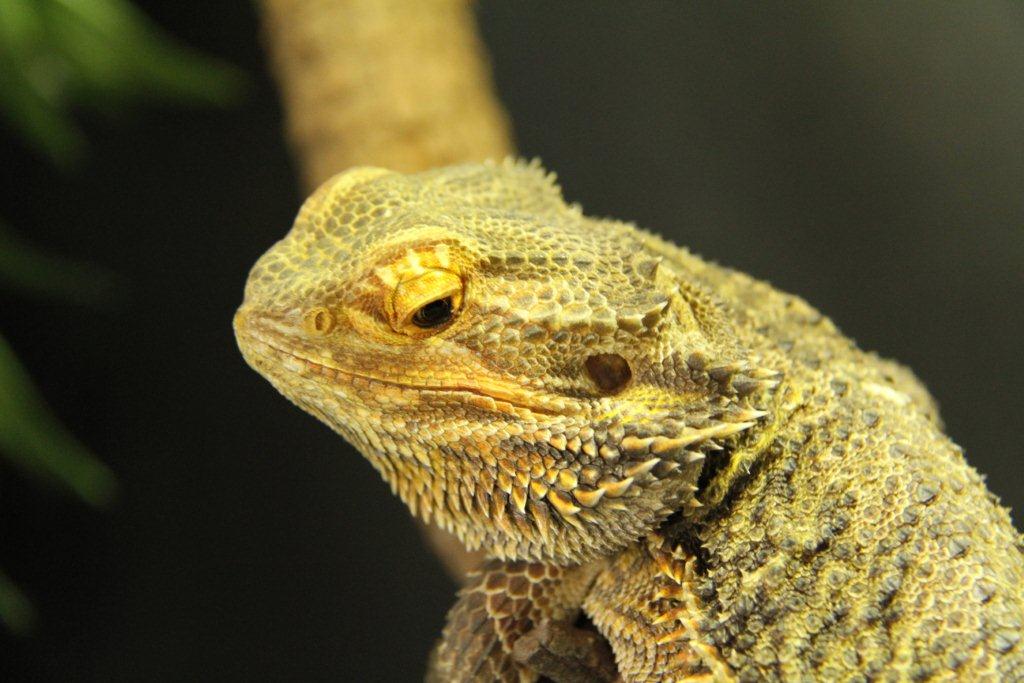 Above are pictures of Maxi and Brett now. Clockwise from the top left is Maxi and Brett enjoying some outdoors time (Maxi is the lighter grey coloured dragon and Brett is more yellow coloured), the middle is them together inside in their enclosure and the right is Brett posing for the camera!

Back to Our Patients