History: A couple of months ago 13yr old Milo walked into his owners kitchen with a suddenly swollen nose. As you can see in the picture below it was quite noticeable and his family were quite worried. 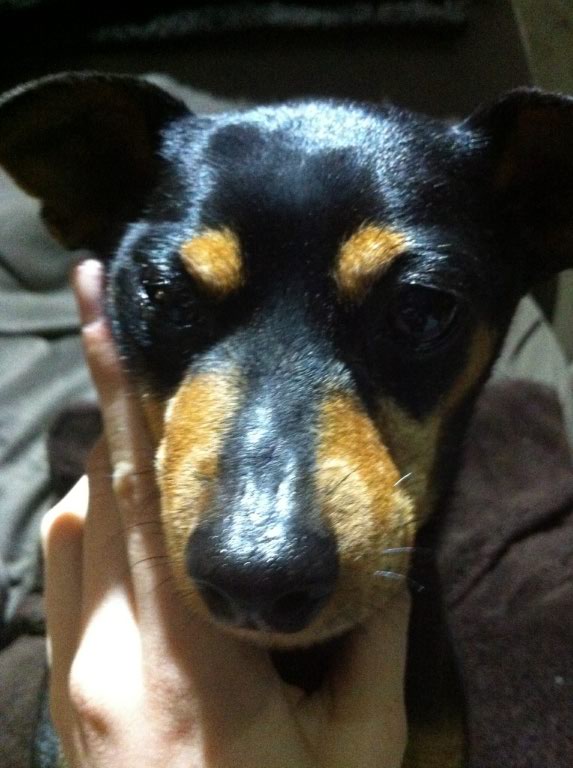 Thinking he might have been stung by an insect somewhere on his muzzle his worried mum gave him an antihistamine that had been prescribed by another vet previously. Milo is a curious little dog who lives on a rural property so he could have easily been stung. Milo had previously been on the receiving end of stings and bites and the antihistamine had worked perfectly before.

Overnight the swelling went down significantly so it was thought Milo’s issue was resolved. A few weeks later Milo’s family noticed the swelling was back again, so Milo was given another antihistamine, this time it did not work so well. Worried, they tried a second dose, but yet the swelling stayed. The swelling must be something else…….

Examination: Milo’s mouth and teeth were examined and it was obvious that he had some moderate to severe dental disease, could this be the cause of the swelling? As Milo was reluctant to have his mouth examined thoroughly he was booked in for a general anaesthetic so that Dr Kate could take a good close look without fear of losing fingertips. If his teeth were the problem a dental would be performed and any rotten teeth extracted whilst he was asleep.

As Milo was nearly 14yrs old, his family were very worried about him having the procedure but knew it would be the best option for him as he was uncomfortable and a cause for the muzzle swelling had to be found.

On the big day, Milo arrived and checked in to hospital. He had a blood test to ascertain how his kidneys and liver were functioning to ensure he was a candidate for a safe anaesthesia and to help us choose appropriate medications for him. The blood test revealed his liver and kidney parameters were slightly elevated (not abnormal for a little doggie of his vintage), but knowing this information allowed us to choose the drugs that would be the safest for him and to prevent further damage to these essential organs.

Treatment: Milo was anaesthetised, placed on intravenous fluids to assist with supporting his kidneys and blood pressure, and then his mouth was examined closely by Dr Kate and Nurse Tabatha.

First it was obvious that he had significant calculus (plaque) and associated gingivitis (inflammation of the gums) and gingival recession (where the gum pulls away from the tooth) in many areas, but mostly affecting the upper right canine tooth; where most of the muzzle swelling had been! 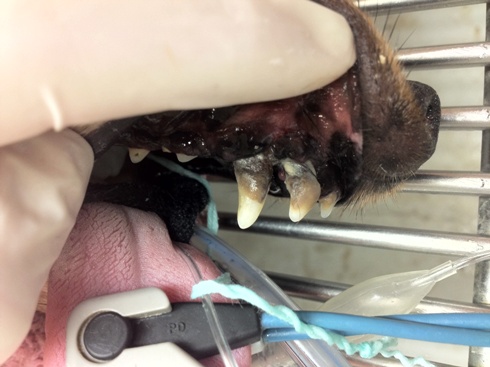 On further examination it was also found that there was an oral-nasal fistula in the area of that upper right canine tooth. An oral-nasal fistula in a hole leading from the mouth area through to the sinus passages; these are mostly caused by dental disease, or other mouth or nose infections or surgery. This was most likely what had been causing Milo’s nose swelling as food and bacteria associated with the dental disease was probably migrating through this hole into his sinus and causing inflammation or infection. Milo’s upper right canine had to come out.

During the dental procedure it was also noted that the upper right and left incisors (next to the canine teeth) needed to be removed due to decay, as did one of his molar teeth as the root became exposed due to gun (gingival) recession.

Milo’s remaining teeth were cleaned and polished and he was woken from his anaesthetic. Milo recovered extremely well from his procedure and was standing and trying to climb out of his recovery bed within only a few minutes (as pictured below) much to the surprise of Dr Kate and Nurse Tabatha! 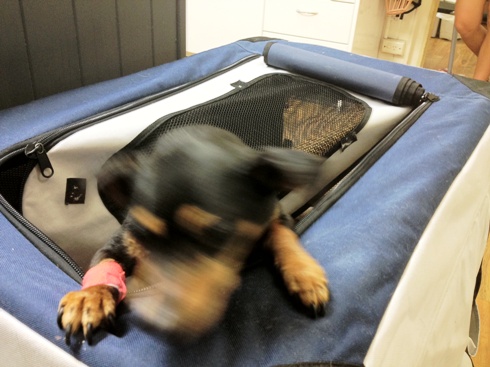 Recoveries of this speed is not common, not even with young healthy doggies, so to see Milo at the ripe old age of 13yrs to spring up like this was astonishing!

Milo went home that evening with his relieved family, who were very happy that the source of the swelling had been found. They took with them the teeth that were extracted to show the rest of the family along with some pain relief and antibiotic medications.

Milo is now enjoying his senior years at home (see below picture) with Jack Russel sister Jasmine. He is the proud owner of minty-fresh breath and now hopefully no further episodes of muzzle swelling! 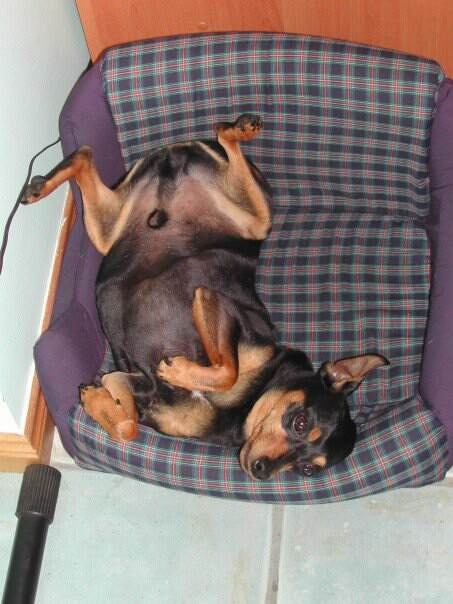 Back To Other Patients