History: Kirra was presented to Wilston Vet Surgery because she was very lethargic and hadn’t eaten in 3 days. She had also been vomiting for 48 hours on and off. Kirra had been taken to the Pet ER, the emergency after-hours center, a week prior as she had been drooling excessively. It was suspected at that time that she had come into contact with a toad and was treated for toad toxicity. At the Pet ER, Kirra’s gums had been wiped out with swabs and flushed with water for a suspected toad toxicity before being sent home.

Examination: On arrival at Wilston Vet, it was found that Kirra had a slight fever and stomach pain. Everything else appeared to be normal. Blood samples were taken and sent off to the lab for analysis. She was given an anti-inflammatory-pain relief injection to keep her comfortable whilst the blood tests were being run.

Blood results revealed an increase in white blood cells indicative of a possible infection or inflammation. Kirra was sent home with antibiotics and instructions for rest and a bland diet.

Initially Kirra seemed to pick up on the medication before returning to the clinic a week later, still unwell. She had hardly eaten or drank at all, and what she did eat, she had vomited back up. She seemed to be able to drink water and hold that down OK. When she was weighed she was shown to have lost 4 kgs since her visit two weeks prior. Kirra’s temperature was still a little high and she was depressed. An intestinal obstruction was suspected so Kirra was booked in for X-Rays immediately and her blood tests were repeated to recheck her white cell count and electrolytes. X-rays confirmed there was a foreign body that appeared to be a bone fragment about 4cm in diameter lodged in her small bowel. Surgery was required immediately. 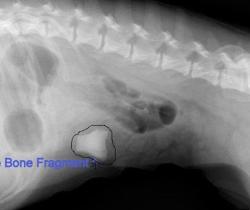 Kirra was given a premedication injection which included a sedative and pain relief. She was then given an induction agent via an intra-venous catheter to anaethetise her. An endotracheal tube was placed down her trachea to ensure a patent airway and to provide her with oxygen and anaesthetic gas to keep her asleep. Her abdomen was clipped up and scrubbed with chlorhexidine and then iodine to ensure asepsis (contamination free).

A procedure called an enterotomy was performed where an incision is made within the portion of the intestine where the bone is located to remove it. The wound was closed with many fine sutures and the abdomen was lavaged with sterile saline to flush away any foreign material that may have leaked from the bowel.

After recovering from the surgery, Kirra appeared quite bright and had managed to eat small amounts of bland food without vomiting. She was discharged from the hospital the next day.

A follow up call to Kirra’s family reported that she was doing well and was on the road to recovery. At her recheck 2 weeks later she had regained her weight and was bright as a button and back to her usual happy self!!

Vet’s Comment Although bones are good for your dog’s teeth they should always be raw. This bone was a cooked bone and was actually one she must have dug up from somewhere as her owners do not feed her cooked bones. Raw bones also can sometimes obstruct the bowel, as can certain raw hide treats and other hard foods. Always take your pet to the vet if you suspect they may have a blocked bowel as it is a life threatening problem that requires surgical intervention.