History:
One Thursday night in July, Talulah’s owner Kirsty came home from work to find Talulah curled up on the couch. This
was a normal occurance for Talulah, however, when she said “Hello” to Kirsty, something didn’t seem right. Talulah’s “meow” was different and she seemed very unhappy. On a closer look Kirsty could see Talulah’s legs were bruised, wounded and very swollen. Kirsty immediately called Wilston Vet to say Talulah had possibly been hit by a car. Kirsty rushed straight down to see us.

Examination:
Dr Amisha was on duty that night and checked over Talulah as soon as she arrived. All vital signs were checked including heart rate, respiratory rate, temperature, mucous membrane colour and capillary refill time. Dr Amisha noted that Talulah’s capillary refill time was very slow and her mucous membranes (gums) were very pale. Talulah was also quite cold and depressed. These are all classic signs that Talulah was in shock from the trauma that she endured earlier that day. Continuing the examination, Dr Amisha found extensive bruising around her right back leg and severe swelling around the hip joint. There were also open wounds around the hock (ankle) joint. Talulah was unable to bear any weight on her hind legs at all. Fractures could not be felt in the hind quarters, however, due to pain and swelling it could not be assessed fully. Talulah’s claws were shredded usually confirms trauma from being hit by a motor car. 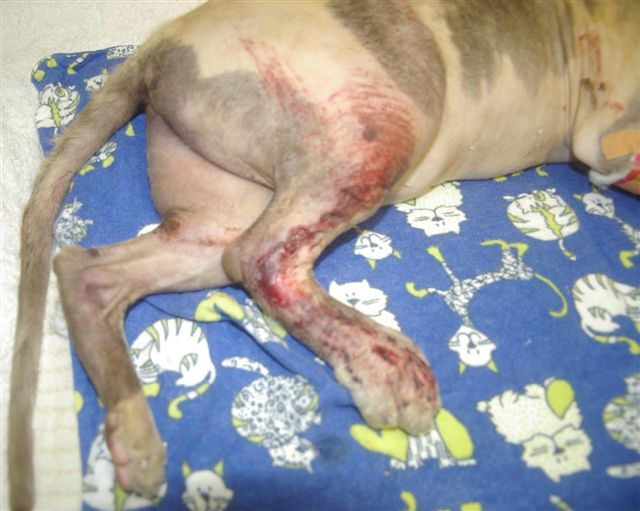 Treatment:
The first thing that needed to be done for Talulah was to treat her for shock. An intravenous catheter was placed in her leg vein through which warmed saline was quickly administered to increase her blood pressure and support her heart. Pain relief was given as well as an antibiotic injection. She was placed in a warmed kennel on a heating pad to help to raise her low body temperature. 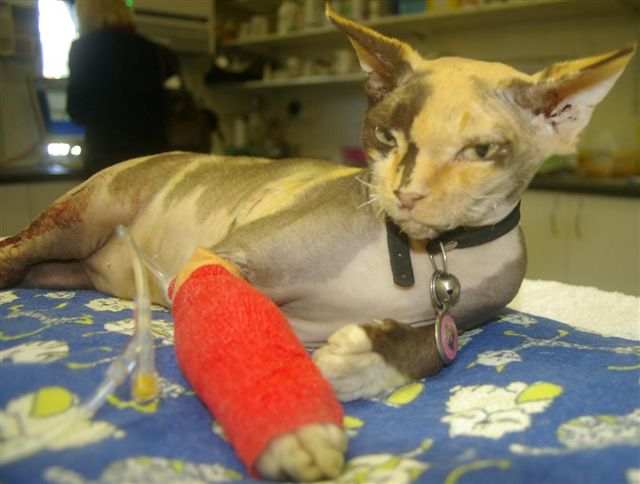 Talulah’s superficial skin wounds were cleaned and bandaged. Once Talulah was stable, Dr Amisha and Nurse Kelly radiographed her hind legs and abdomen. Dr Amisha needed to see if there were any broken bones in her legs and also wanted to confirm that her bladder was intact and had not ruptured from the accident. One image was able to be obtained, but unfortunately did not include a good view of Talulahs hips as it was difficult to position her due to her pain and stress level. This image was enough to confirm that her bladder was intact and that there were no obvious fractures in her hind legs. Dr Amisha decided that it would be best for Talulah to be stabilized further prior to sedating her to obtain x-rays of her hips. It was more important to get Talula over her life threatening injuries first. 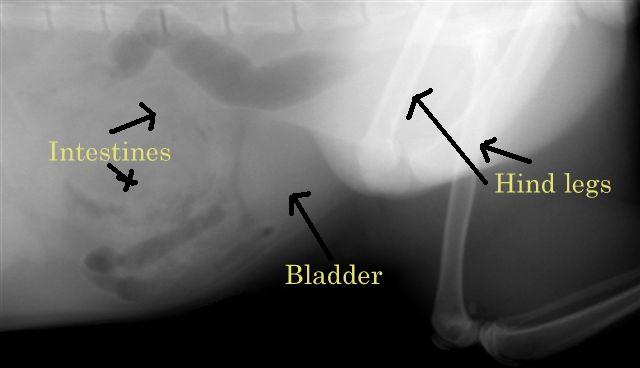 << X-rays show that her abdomen and leg bones were OK

Talulah was hospitalised for the rest of the night and kept warm, confined and maintained on IV fluid therapy.

Within a few hours Talulah had improved and by the morning she was much warmer, brighter and over her shock.
She was given more pain relief and her leg bandages were removed. Her capillary refill time was markedly better indicating resolution of the shock. Unfortunately she was still unable to stand and get herself to the litter tray, but was able to empty her bladder without any help.

Talulah was hospitalised for the duration of the day andnight to be monitored and maintained on IV fluids. She was sent home the next morning with pain relief and antibiotics and instructions for strict confinement. Kirsty was instructed to make sure that she was eating, urinating and defecating. Earlier testing had shown that all her nerves were intact, but she had not produced any stools whilst at the clinic, and this was a concern.

We phoned Kirsty 48 hours later to follow up on Talulah’s progress. She was drinking and eating well (fresh mince) and able to walk a little to get herself to the litter tray to urinate, but hadn’t yet defecated. Kirsty brought Talulah back into the clinic for a re-check that night and Talulah was given an enema to help her pass feces. The pelvic pain and swelling from the trauma was making it very difficult for Talaulah to defecate normally. Following the enema, Talulah began to pass feces normally and continued to improve at home with lots of TLC given to her by her family.

In the weeks following her discharge, Talulah became stronger on her back legs and was nearly back to 100%. We expect that over the next month or so Talulah will make a full recovery. She is one very lucky cat!