History: Biscuit was brought into Wilston Vet Surgery with a sore leg. She was accidentally stood on after having a bath at home. At this time Biscuit was 17 weeks old and weighed only 2.8 kgs!

Examination: Biscuit was checked over by Dr Phillipa from head to toe. Then attention was paid to her sore leg. Biscuit was not weight bearing on her leg and the area around the mid lower leg was swollen, hot and painful to touch. Dr Philippa suspected a broken bone but X-rays were needed to confirm this and to assess the extent of damage to the bone.

Plan: Biscuit was admitted to hospital for X-rays to be taken of her leg. She was given a light sedation as she was so excited and wriggly girl and the staff needed her to be still to get a clear image on the x-rays. The radiograph showed a break of the Tibia bone. The type of break she had is known as a spiral fracture. This is where the fracture line spirals around the shaft of the bone. 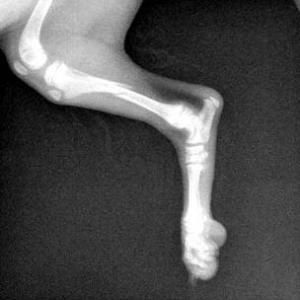 Treatment: The plan for Biscuits broken bone was to immobilize the leg with a splint and support it with a bandage for a minimum of 3 weeks. While Biscuit was still sedated clinic staff set to work on bandaging up her leg. Care was taken to not handle the fracture site too much as this could cause more damage to the bones and tissues surrounding the fracture.
Normally a splint made from plastic or resin/plaster would be heated up and molded to fit Biscuits leg. However, because she was so young this method would not work as she would still be growing and the splint would become too small for her in a matter of a few weeks. Instead a small light wooden splint was chosen. Bandaging requires a high degree of skill otherwise it can cause more harm than good e.g.: too tight can cut off circulation to the limb or too loose will not provide enough support. 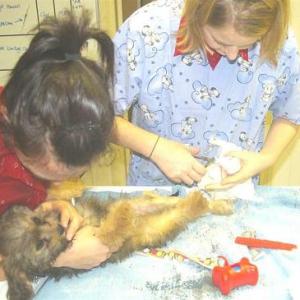 First little bits of cotton wool were placed between Biscuits toes for comfort then two strips of tape, which we call stirrups, were stuck to either side of the limb. These help the bandaging to stay on. Next a thick layer of cotton wool padding was applied to the leg to prevent the splint from pressing on the skin and causing damage. The splint was placed on the limb so that the joints above and below the site of the fracture were included. More cotton wool was wrapped around the splinted leg, and then a conforming layer of material applied to hold everything in place. Finally an adhesive outer layer support bandage was applied to protect the inner layers and hold all the bandaging together.

Home care consisted of Biscuits family ensuring she be kept as quiet as possible as well as keeping the splint dry. Biscuit needed to be back at the clinic in one week for a revisit and bandage change. 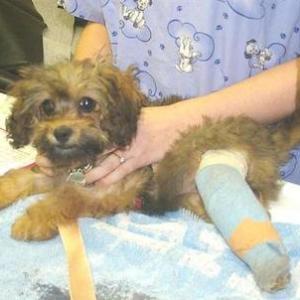 A week later little Biscuit hopped back into Wilston Vet on her three good legs. Needless to say all the staff was excited to see her as she is always so enthusiastic.

A little sedation was needed again as some handling of the limb could be a little painful and Biscuit needed to be still to ensure a safe and effective bandage.

A while later she was all patched up and ready to go home. Her owners were instructed to bring her back again in a week for another splint change.

Visit number two saw Biscuit as her usual bubbly self. Sedation was given again to settle her and the staff set to work. The vet could feel a nice callus forming over the fracture site meaning that it was becoming stable again. Biscuits healing was progressing well, the skin under the bandage looked good and her toes looked normal. Bandaging was repeated as per her previous visit 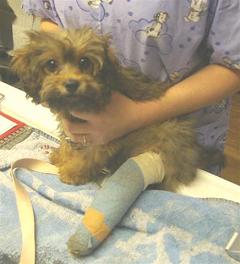 One week later at her next visit, Biscuits splint was removed and replaced with a lighter soft bandage to encourage her to use the leg more. This was done without sedation, so while Nurse Karen changed the bandage, Nurse Kelly distracted Biscuit with some yummy liver treats. Biscuit was such a brave girl and was always happy to come to the clinic. She even went to puppy school with her bandage on!

One week later at her last visit the bandage was removed completely and she was encouraged to walk on her leg as normal. After a short while of being a little uncoordinated, she was off running around the clinic providing much entertainment for the staff. 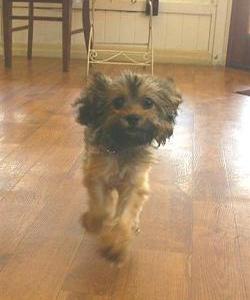 After a nice clip and bath Biscuit was reluctantly sent home (as the staff loved her so much!) with instructions for some home physiotherapy. This consisted of passive flexion and extension of her leg to encourage full use again. 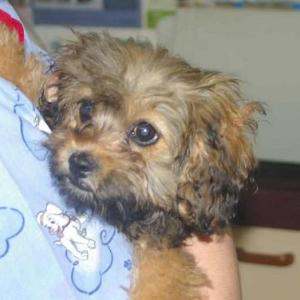 Reports from follow up and puppy pre-school reveal that Biscuit is doing well and is full speed ahead!