History:
Grover presented to Wilston Vet Surgery as he had been vomiting up water, anorexic (not eating)
and lethargic. This had only started overnight. His owners also noticed he was walking in a hunched up position as though he had stomach pain.

Examination:
Upon examination by Dr Amisha, Grover’s temperature was normal at 38.6 degrees, his heart rate was a little elevated at 130 beats per minute, his capillary refill time was good and his gums were pink. It was noted however that his gums were a little tacky which indicated some degree of dehydration from the vomiting. On palpation of his abdomen, Dr Amisha noted that he appeared to be painful, but no foreign body could be palpated.

Treatment:
The first plan of action was to admit Grover for X-Rays of his abdomen to rule out a gastro-intestinal obstruction (foreign body). Grover was given a light sedative so that he would lie still for the x-rays, as despite his condition, he was still quite bright and active. 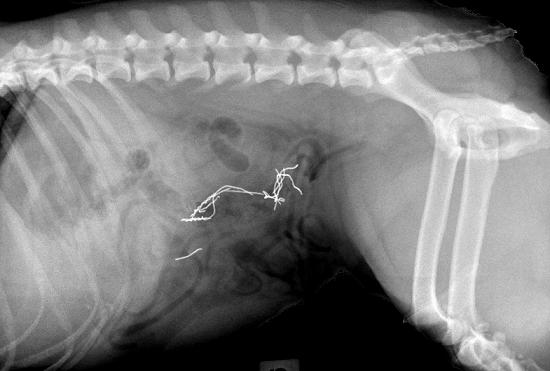 X-rays (above) clearly show the wire in Grover’s abdomen

Radiographs confirmed Grover did indeed have a foreign body in his intestine that looked like wire (ouch). Several pieces of wire were located in his small and large intestine which suggested Grover had ingested them at least 12-24 hours ago. The wire actually could be visualized outside of the intestinal lumen, which meant that the wire had perforated the bowel and entered the body cavity. This is a serious situation which leads to peritonitis (infection in the body cavity as intestinal bacteria and fluid leak out from the piercing injury). It was decided at this point to refer Grover for an ultrasound to determine the exact position of the wire, followed by specialist surgery as it was likely that a portion of bowel would require removal. Grover was referred into the capable hands of specialist surgeon Dr Richard Eaton-Wells at QVS (Queensland Veterinary Specialist Services). Grover had already met the team at QVS two years earlier when he had indeed, ingested another foreign body, which had required surgery at that time as well. 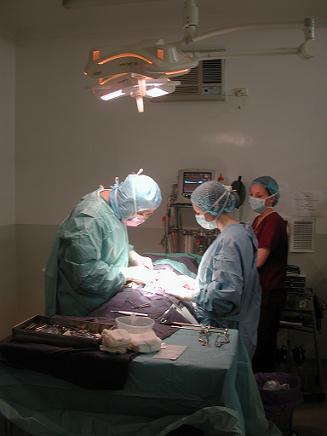 Another piece of wire was located near the incision and was milked up to be removed from the same site. Approximately 12cm of bowl around the perforation was not healthy and was dying, so Dr Eaton Wells removed that section of intestine and then sutured the healthy ends together. This is known as an end to end intestinal anastamosis. 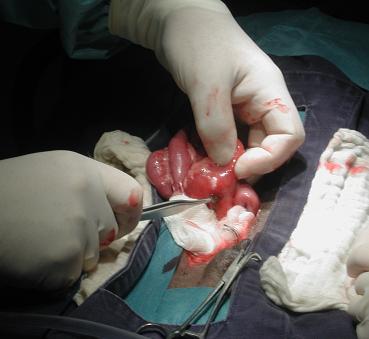 There were also adhesions and scarring from the first surgery that Grover had endured 2 years earlier, so these were broken down manually to free up the intestines. 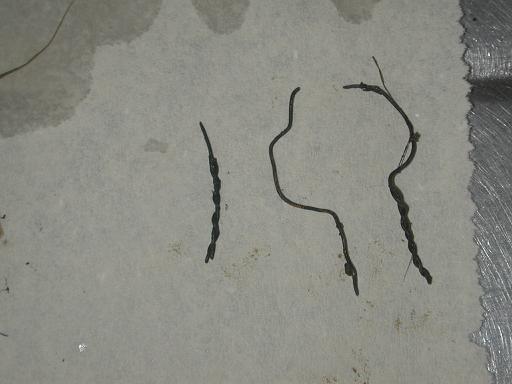 << This is the wire that was removed during surgery

Two more pieces of wire were palpated in the colon, but as they appeared to be well incorporated in faecal material it was decided to let them pass out the rectum of their own accord. The abdomen was flushed out with copious amounts of warm saline in order to remove any bacteria and then a routine closure was performed.

Grover recovered well from his operation and was hospitalised a few more days for observation. By the next day he was eating and drinking well with no vomiting, and passed a large amount of faeces with some wire in it.

Grover was then sent home to continue his recovery with instructions to be kept confined and quiet for at least two weeks. (easier said than done with a Staffy!)

Follow Up:
10 days later Grover came back to Wilston Vet Surgery to have his sutures removed. His wound had fully healed so it was back to life as normal. Grover was told that wire was not part of a staple daily diet and he shouldn’t eat it anymore ( laugh out loud ).

Grover’s parents have made the wise decision to take out pet insurance in order to be prepared for the unexpected! ………….as well as cleaning up their whole backyard bare so there is not one bit of rubbish in it that Grover could find potentially palatable!