History: Hendrix was brought in one Saturday morning as his owner was concerned that he was quiet and not his normal affectionate self. Poor little Hendrix was found lying under the BBQ not wanting to move. The owner found his cat collar next to one of their dog’s food bowls and suspected that their dog may have attacked Hendrix. (Mind you, their dog is a Great Dane so that was very worrying as Hendrix is so little)

Examination: Hendrix presented with obvious signs of pain and shock. He was cowering, not wanting to walk and reluctant to be touched on the head. He had pale mucous membranes and was very depressed. Upon examination Dr Brothers found that Hendrix’s left eye had a large blood blister behind it which caused his eye to protrude. He also had blood coming from both nostrils. A fracture in his lower jaw could be felt but x-rays would be needed to make a definite diagnosis.

Treatment: Before the xrays could be taken, Hendrix needed to be treated for shock and pain. He was given a pain relief injection, antibiotics, a cortisone injection and placed on intravenous fluids to stabilise his condition.

Hendrix was hospitalised over the weekend and kept on the intravenous fluids. He was offered Hills Prescription Diet a/d to eat. This diet helps to aid animals in recovery from illness or accidents as it is easily digestible, is very soft and provides added calories and nutrients.

Hendrix had difficulty eating the food with his broken jaw so a special feeding tube was placed through his nose and down the oesophagus into the stomach. This tube would enable the nurse to administer food via the tube into his stomach, so he would receive all the nutrients he needed. 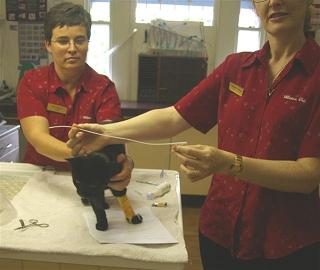 Dr Brothers applied a local anaesthetic into one of his nostrils so that it would numb the area whilst the tube was being placed, eliminating any pain. Although this sounds like it would be a procedure that would be better to be done he was sedated, it was very important that Hendrix was awake so that Dr Brothers could determine that the tube was being placed correctly into the stomach and he was able to swallow. If placed incorrectly it could have severe ramifications as food could be accidentally given down into the lungs. 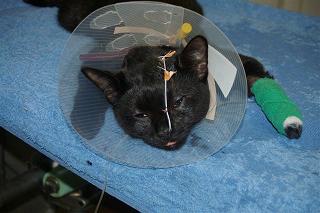 Once the tube was in the correct position, it was secured with some sutures to his head and an Elizabethan collar was placed around his neck so that Hendrix would not be able to pull the tube out.

Hendrix was given a sedative so that the x-rays could be taken of his jaw. The x-rays confirmed that Hendrix did indeed have a fracture of his lower jaw. 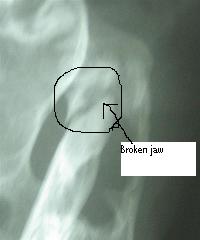 Once Hendrix was awake and up and about he was fed the a/d food which is mixed with warm water to be fed to him via the feeding tube.

Hendrix was hospitalised for the next day and was referred to the dental specialist for further treatment with a view to having to have some screws and pins placed to hold his jaw in place .

The good news for Hendrix was that his fracture was stable and did not require surgical repair. He was able to go home and monitored to see if he could eat by himself. The Elizabethan collar had to remain on so he did not claw at his mouth and disturb the fracture from healing.

Hendrix had his feeding tube removed and is now eating and feeling a whole lot better. 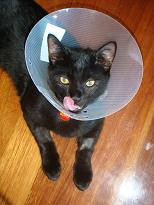 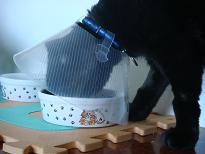