History: Malachi is a beautiful 11yr old male Border Collie who presented to Wilston Vet with a 3 day history of changed bowel motions. Malachi is normally very ‘regular’ with his motions so his owner knew that there was likely a serious problem and brought him into Wilston Vet for a full health check

Examination: Dr Kate performed a full health examination on Malachi. He had a normal temperature and appeared in very good health for an old fellow! Malachi had not had any vomiting; however his owner had noticed him straining to defecate. His bladder and prostate were normal on physical examination. Abdominal palpation did not demonstrate any pain. Malachi is not known to be an indiscriminate eater – i.e. he does not normally chew on toys or other objects, nor hunt or eat dead animals in the yard. Dr Kate recommended that an x-ray be taken of his abdomen to see if there was an obvious cause for his symptoms. 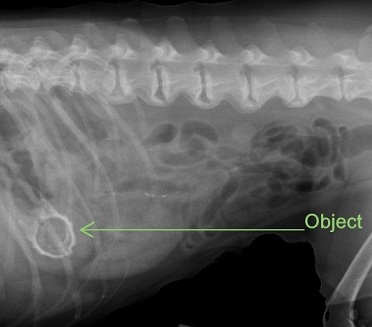 The x-rays confirmed the presence of something abnormal in Malachi’s stomach or upper small intestine. X-rays are a wonderful diagnostic tool for locating and identifying the presence of an abnormality, but they often cannot definitively diagnose the exact cause. The changes on Malachi’s x-ray could have been due to a simple obstruction such as a foreign body (toy, bedding, or other object) or mineralisation (a build up of mineral deposits) or something more sinister such as neoplasia (cancer).

Dr Kate recommended that Malachi be transferred to a specialist centre for an abdominal ultrasound. An ultrasound can more accurately diagnose the cause of an abnormality detected on x-rays. Malachi’s owners were very worried about him and were happy to transfer him to the specialist centre.

Treatment: At the specialist centre, Malachi had an abdominal ultrasound which confirmed the presence of a physical obstruction in his stomach. An endoscopy (where, under anaesthesia a small camera is placed into the stomach/intestines) was then performed where the specialists located a large piece of plastic material! This is what the radio-opaque image was on his x-ray.

Unfortunately, the plastic material could not be retrieved by endoscopy so Malachi then went into surgery to have the object removed.

He was discharged from the specialist centre the next day and he had an excellent recovery. Malachi   has been 100% well since his major surgery. His owners are still perplexed as to why their 11yr old dog would suddenly eat something like plastic and are still not sure exactly what it was that he had eaten!