History: Luca is a very brave cat who was brought into the clinic because his owners were very concerned that his tail looked a bit crooked and there was some fur missing.

Examination: Luca was brought into the treatment room to be examined by Dr Kate. On closer examination Dr Kate could see the bend and the hair missing but with careful examination she realised that Luca had actually fractured his tail about 10cm from the tip! Luca was admitted to hospital for further examination. 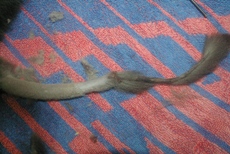 After clipping the hair away from the tail, Dr Kate could clearly see that the fracture was so severe that Luca had lost the blood and nerve supply to most of his tail. This meant Luca had no sensation from 4cm above the fracture to the end of his tail. The treatment for this is to have it removed (amputated) to prevent him accidentally injuring it further and to remove the tissue that would become necrotic (die) due to the lack of blood supply.

Dr Kate contacted Luca’s owner to discuss the injury and to recommend that Luca have the affected area surgically removed. She discussed that the amputation would be relatively high towards the tail base and she discussed the risks and complications of the surgery. Complications of this surgery include loss of the nerve supplying the hindquarters and anus, especially when amputating close to the tail base. This could potentially cause balance issues and faecal incontinence. Wound break down or ‘dehiscence’ is another complication along with the possibility of not successfully removing all the affected tissue and having to repeat the surgery to remove more affected tissue.

Lucas owners understood these risks and gave consent for Dr Kate to treat Luca as necessary.

Treatment: Luca was given a pre-medication. This is an injection given subcutaneously (under the skin) which contains a sedative and pain-relief. This takes about 20 minutes to start taking effect. A pre-medication injection relaxes the patient before putting them under a general anaesthetic, making the procedure much smoother and safer.

Once the pre-medication started working and Luca was looking sleepy, her was put under a general anaesthetic by Dr Kate and then prepped for surgery by a group of nurses.

Below are some pictures of the procedure of removing the tail 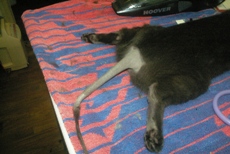 Here is the tail all clipped up for the surgery 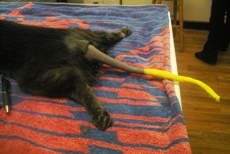 Clipped and cleaned, the bandaged part of the tail is the part that will be amputated 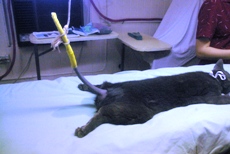 Here is Luca positioned on the surgery table 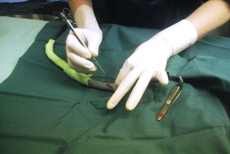 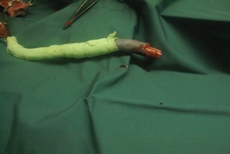 The removed section of tail 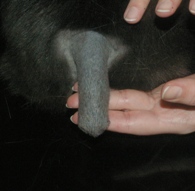 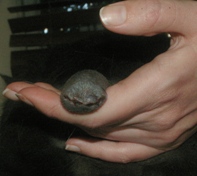 The Surgery went very well and the affected part of the tail was removed. Luca woke from his general anaesthetic smoothly and he had an elizabethan collar (plastic cone over the head) fitted to ensure that he could not interfere with his wound while it healed. He was sent home later that afternoon with pain relief to continue at home.

Luca came back 5 days after his surgery for a post op check. His owner reported that he was very comfortable and happy at home. Dr Kate checked Lucas tail and it had begun to heal beautifully.

Luca’s tail healed perfectly and here is a picture his mum sent us of him relaxing in his bed at home. 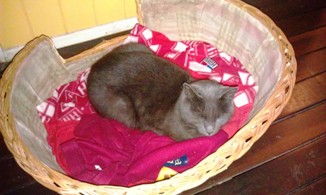