History: Oscar’s owners were away on holidays. When they arrived home, they discovered him panting and unsteady on his feet. His owners called the clinic and they were instructed to bring him in immediately.

Examination: Oscar presented to Wilston Vet late in the afternoon with primary concern for panting and ataxia (wobbly hind legs). His owners mentioned he wasn’t interested in his food and appeared more quiet than usual. His gums were bright red and his heart rate was slightly elevated. His front legs were normal but his back legs were very wobbly. His temperature was normal. He was very flat and quiet and produced a dry cough/retch during his examination. Oliver was showing classical symptoms of tick paralysis. In order diagnose tick paralysis, Dr Brothers needed to find the tick.

Treatment: An extensive tick search began with 2 vets and 2 nurses. This involves walking your fingers backwards against the coat all over the body, including under the collar, in the ears, up the nasal cavity, in the mouth, in-between the paws/pads and around the bottom. After 30 minutes there was no tick found. In order to be able to find the possible tick it was decided that his fluffy coat would need to be completely shaved off.

A moderately engorged paralysis tick was located and removed from Oscar’s right ear. A Paralysis tick is identified by its grey body and its legs which are located at the front of the body. This tick buries into the skin, creating a “crater” around it. 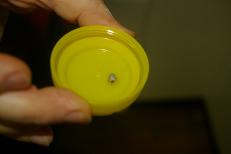 Once the paralysis tick was removed, Oscar needed to receive tick anti serum treatment and be closely monitored. A sedative was given to help relax Oscar during his treatment as he was exhibiting signs of stress. Atropine was also given to help absorb any mucous and saliva in the mouth. An intravenous catheter was inserted into the vein for Dr Brothers to administer the anti tick serum. During this time Oscar was closely monitored to ensure no reactions occurred.

A PCV/TP (Pack Cell Volume/ Total Protein) needed to be performed. This test will inform us if Oscar is dehydrated. This involves a small collection of blood that is then spun down in a centrifuge. His PCV was 40% (below right photo)and his TP was 7mg/dl (below left photo).These results indicated that Oscar was well hydrated and no fluid was shifting into his lungs (which is one of the side effects of tick envenomation which can be fatal). 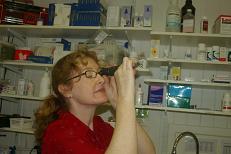 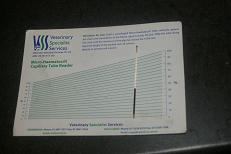 Once the tick anti serum was administered, Oscar was given a warm tick bath. This wash would kill any remaining ticks. 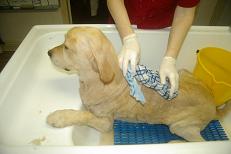 Oscar was then placed into a kennel and monitored closely until his owners arrived to collect him. Oscar was then transferred over to the Pet ER for observation throughout the night. Overnight observation was crucial for Oscar’s recovery. Vets/nurses are on hand 24 hours and can intervene if any respiratory or vomiting issues occur, or if any further treatment is required.

The following morning Oscar was transferred back to the clinic where we continued to monitor him. Oscar’s food was withheld for 2 days. Withholding food ensures that the patient does not vomit, gag or retch, as they can loose their ability to swallow. Oscar’s urinary output was also closely monitored. Some patients can loose function to urinate and the bladder may need to be manually expressed. Luckily Oscar urinated during his stay.

His gag reflex had returned, he was urinating and his walking improved. Later that day Dr Brothers introduced a small amount of water for him to drink. Over the day Oscar did not vomit and he held the water down. Slowly, small amounts of food were introduced….. Oscar was very hungry and ate well. 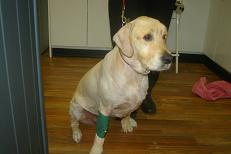 Followup: Oscar was recovering well and could go home that afternoon. His catheter was removed and his owners were very happy for him to return home. His owners were advised to monitor him closely and given strict instructions not to exercise him for 2 weeks. Exercise can put a lot of stress on the heart after any tick paralysis treatment and could be fatal. It was also advised to use a tick preventative such as frontline or advantix every fortnight and also perform daily tick searches.

Where do Paralysis ticks come from?

When a tick attaches on to your pet, it will then feed by engorging on blood, then releasing toxins from its saliva into the animal. The toxins have several affects that cause muscle paralysis in the hind legs, throat and chest.

Remove the tick immediately and place it into a jar. Keep your pet quiet and cool. Proceed to the nearest veterinary clinic.
*******Remember to check your pet daily and to apply a tick prevention.******