History: Rebel is a dear old faithful dog who is doted upon by his loving owners. One Sunday he was attacked by their neighbour’s dog. The dog picked Rebel up by the neck and shook him violently. Rebel was immediately rushed to the Pet Emergency Rooms (PetER).

Examination: On presentation to the PetER, Rebel was still able to walk, but was very quiet and in shock. There were several lacerations, puncture marks and severe bruising over his whole body. The wounds were extensive and had very deep pocketing (almost the size of half his body). There were some concerns that the wounds were so deep that they had punctured his lungs.

Treatment: Rebel was hospitalised at the PetER overnight and treated for his shock and pain. He was put onto an intravenous drip and given heavy pain relief and antibiotics. X-Rays were taken of him to see if there was any internal damage such as broken ribs, lung collapse or windpipe injury. Thankfully there did not appear to be any major internal damage.

Rebel was kept in an oxygen enclosure overnight to keep his oxygen levels up as they were quite low initially.

On Monday, once he was stable, Rebel was transferred to Wilston Vet where Dr Meredith assessed him. Rebel was now stable for surgery so he was anaesthetised and the wounds were clipped and flushed with sterile saline. Dr Meredith then sutured the wounds closed and placed Penrose drains under the skin. These latex drains enable the serum under the skin to escape out from the body as it heals. This ensures that the fluid does not build up into a bubble under the skin (forming a seroma).

Rebel was also given high doses of broad spectrum antibiotics to prevent bacteria escaping into the blood stream, as this can cause septicaemia and death. This was probably now the major hurdle to get Rebel over to ensure he would make a full recovery.

Rebel woke up smoothly from his anaesthetic, although he was still quite sore. He was given some heavy pain relief to take home, as well as more antibiotics. Rebel’s owners were instructed to gently bathe the drains morning and night to ensure they were draining well. A blood-tinged discharge should drip out slowly from the drains as the wounds heal.

Five days later, the drains were removed, and a further five days after that, the sutures were removed. Although there was still a lot of bruising, Rebel was much more comfortable. Below are some pictures of his wounds after they had healed. 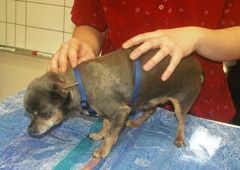 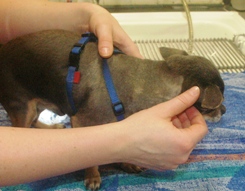 Rebel made a complete recovery and is back to being spoilt by his owners and running around the back yard. Below is a picture of him with Wilston Vet nurses Erica and Melissa. It seems Rebel is having some troubles resisting the urge to kiss Erica back! 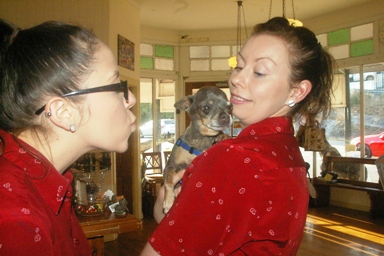