History: The lovely, smoochy little cat Eddie (as in Edina from ‘Ab Fab’) came in to see us late last year for her annual vaccination. Her owners were a bit concerned that she had been losing weight and was eating less food than normal. Eddie had also been slightly less active for a while and her owners were wondering if she was suffering from arthritis, as Eddie is now 14yrs old.

Examination: Dr Nichola examined Eddie and quickly realised that the white parts of her eyes (the sclera) looked slightly yellow. 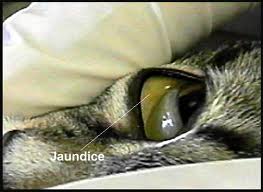 A yellow discolouration to any part of the body, namely the eyes, gums or skin typically indicates an animal has jaundice. Jaundice (or icterus) results from the accumulation of bilirubin in the blood and tissues. An increase in blood bilirubin can be due to increased bilirubin production or decreased bilirubin excretion. An increase in production is usually caused by the break-down of red blood cells. A reduction in excretion can be caused by a problem with the liver itself or an obstruction of the bile duct which transports bile from the liver to the intestine. Eddie was slightly underweight but otherwise looked to be in great health.

Treatment: The first steps in trying to work out what is causing an increase in blood bilirubin are to perform blood and urine tests. If the jaundice is due to the break-down of red blood cells, anaemia will be evident on the blood results. Eddie’s urine tests showed she had bilirubin in her urine and her blood results ruled out anaemia however her liver enzymes were greatly elevated. This indicated a primary liver problem or bile duct obstruction much more likely.

Based on the blood results an ultrasound would be required to examine Eddie’s abdomen and to enable us to see if there was any visible abnormalities that may be causing Eddie’s problem. The ultrasound showed that her liver looked normal but was slightly larger than it should be. The ultrasonographer could not see a bile duct obstruction so we now knew the liver was the likely problem. The most common primary liver disorders in cats are ascending cholangiohepatitis (a liver infection in which bacteria from the intestine tracks up back towards the liver), lymphocytic-plasmacytic cholangitis (an inflammatory liver condition) and also lymphoma (cancer of the liver).

Nichola immediately started Eddie on antibiotics to treat for a possible liver infection. Eddie seemed to improve on the antibiotics, however, when her blood tests were repeated 2 weeks after finishing the antibiotics Eddie’s liver parameters including her bilirubin had in fact worsened. She was then started on a longer course of antibiotics with the plan to repeat her abdominal ultrasound and blood tests after Christmas.

Eddie’s repeat ultrasound after Christmas showed nothing had changed since her first ultrasound and it was recommended that the only way to know what was going on would be to perform liver biopsies under a general anaesthetic. At 14yrs of age, Eddie’s owners were understandably reluctant to perform an invasive procedure like this and so her blood tests were repeated. The results showed that her liver parameters and her bilirubin had slightly increased even further. We knew we would have to try something else to help Eddie so we started a trial course of steroids (prednisolone). Steroids are a treatment of choice for inflammatory liver conditions and lymphoma. Steroids work by ‘dampening down’ the immune response and reducing inflammation. 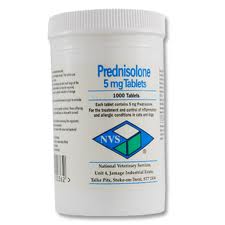 We are pleased to report that Eddie’s appetite and energy levels have greatly improved on the steroid tablets. She is putting on weight and her arthritis seems to have improved as well. We look forward to repeating Eddie’s blood work in the coming weeks and hopefully we will see an improvement in her blood results. 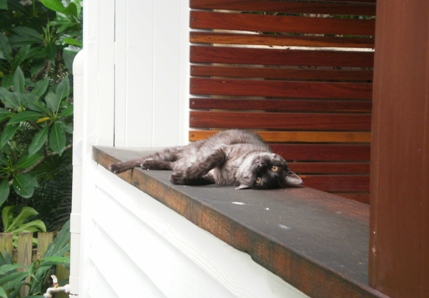 We wish Eddie and her owners all the best.